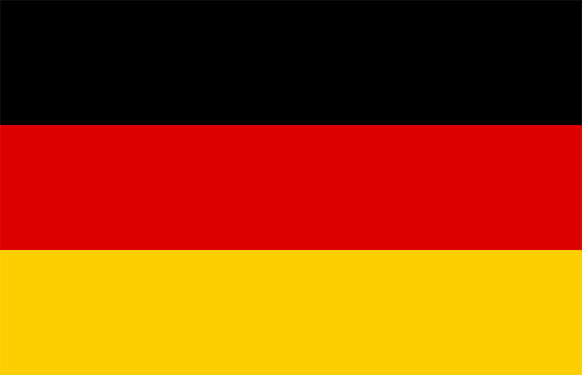 About Germany (Deutschland) and German Language :

Germany is one of the Europe’s largest countries. It is a member of the European Union. Germany has the biggest economy in Europe. It exports everything from vehicles and machines, to chemical products and metals. One-third of Germany is still covered in forests and woodlands.

Location: Germany is in Western and Central Europe, bordering Denmark to the north, Poland and the Czech Republic to the east, Austria to the southeast, and Switzerland to the south-southwest. France, Luxembourg and Belgium are situated to the west, with the Netherlands to the northwest.

Capital: Berlin is the capital and chief urban center of Germany.

Flag: The flag of Germany is a tri colour consisting of three equal horizontal bands displaying the national colours of Germany: black, red, and gold.

Climate : Germany’s climate is moderate and has generally no longer periods of cold or hot weather. Northwestern and coastal Germany have a maritime influenced climate which is characterized by warm summers and mild cloudy winters.

Currency: The currency in Germany is Euro (€)

Fun and Interesting facts About Germany :

A1 : You learn how to make simple enquiries in speaking and writing, and to give instructions. You build on your basic grammar skills and increase your vocabulary.

A2.1 & A2.2 : You learn how to express yourself adequately in familiar, everyday situations and to read and understand simple texts.

B1.1 & B1.2 : You consolidate and revise basic grammar structures, and learn to lead discussions on interesting topics.

B2.1 & B2.2 : You have a command of the essentials of German. You practice reading, writing and discussing difficult topics and work-related issues.

C1 : You learn to express yourself clearly both in speaking and writing on a large number of topics and to understand almost all texts.

C2 : Individually  you can express yourself fluently in German. You work on literary, socio-political, cultural and scientific topics.